Do frogs and toads cause warts?

There is an interesting story concerning frogs in the Bible, in the book of Exodus. In the story, Moses is before Pharaoh, king of Egypt, asking that the children of Israel be allowed to leave Egypt to worship God. Pharaoh refuses, and God sends a series of plagues on them.

Among the plagues, God strikes the Egyptians with boils on their bodies. Some have suggested that these boils were actually warts, but is it possible and why would it be important to know? Let’s look at how it could happen, and why it has implications for us now regarding infectious warts and their treatment with tea tree oil.

...but first let's back up a little 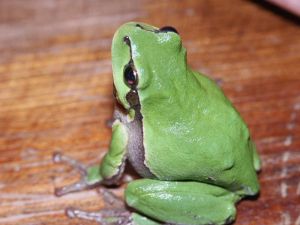 Exodus 7:19-21 And Jehovah said to Moses, Say to Aaron, Take your staff, and stretch out your hand over the waters of Egypt, over the rivers, over their canals, and over their pools, and over every body of their waters, so that they may become blood.

And blood shall be in all the land of Egypt, both in wooden and in stone vessels.

And Moses and Aaron did so, as Jehovah had commanded. And he lifted up the staff and struck the water which was in the river before Pharaoh's eyes, and before his servants' eyes. And all the water in the river turned to blood.

And the fish in the river died, and the river stunk. And the Egyptians were not able to drink water from the Nile. And the blood was in all the land of Egypt.

Euglena are single-celled animals with a single flagella. They can be common in very nutrient-rich waters like stock ponds and sewage lagoons.

Water with Euglena blooms may appear bright pea green in color. Scientists recently confirmed a case where a particular species of Euglena caused a fish kill in a North Carolina fish farm.

The species of Euglena that caused the fish kill can turn red during daylight hours, thereby causing a sort of freshwater "red tide". 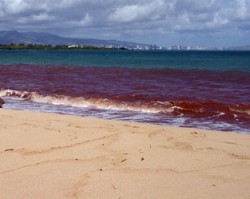 Euglena are interesting because they are a sort of combination of plant and animal. They can make their own food like a plant, but they can also eat other things, like an animal. They can also swim and move. Scientists argued for years about which Kingdom to put them in, Animal or Plant? Right now they are in neither; most scientists put them in the Protist Kingdom with other microscopic organisms, such as amoeba and paramecium.

The Euglena Protist organism has several predators known, one of which is the frog. So in theory, it’s possible that the frogs, suddenly presented with an abundance of food, multiplied rapidly, and then began to look outside the river for food. They might have spread everywhere.

For instance, the American bullfrog can lay 15,000 eggs its first year. By the time the bullfrog is 10 or more years old, it can lay 50,000! The eggs develop into tadpoles, and then in warm and nutrient rich waters, rapidly develop into adolescent, hopping frogs!

If the river had a huge fish kill, then there would be few predators to eat the little green frogs, and so you’d have a frog population explosion in a very short time.

So, how does this relate to plantar, filliform, and genital warts?

Well, in her paper on the causes of warts, Leisa James states that

“Massing and Epstein (1963), reported that new warts occurred three times as frequently in infected children as in uninfected. Occupational handlers of meat, and poultry seem to have high incidences of hand warts as not only are they subject to trauma but also their skin is subjected to prolonged states of maceration by immersion in water and tissue fluids (Bunney et al 1992).”

Handlers of meat and poultry seem to have a higher incidence of hand warts due to prolonged exposure to water and tissue fluids. This is important because the Egyptians picked up and put in piles the dead frogs, by hand! We know that warts are contagious!

Precautions should be taken to keep your hands and skin clean before and after contact with tissue fluids whether from food or from sexual contact. Using a soap that contains tea tree oil can help. Here's a quick easy way to find tea tree oil soaps and lotions.

This is valuable information, because we see that warts are more easily transmitted when the skin has suffered micro trauma. Micro trauma could easily occur during any number of activities, including sexual activity.

When we consider that genital warts are caused by 30 something viruses, spread through sexual activity, the necessary environment and friction are present to encourage the spread of genital warts.

The combination of friction, tissue fluids, moisture, humidity, and the HPV virus make a volatile combination that encourages the development and spread of genital warts. It wasn’t known until modern history that warts were contagious, but now that we know, we can do a few things to prevent plantar and genital warts.