James Beane
a little about the author
of this website

Well, I've got to start off right away telling you that talking about me, James Beane, is one of the hardest things for me to do on this site.

Here's what you'll learn on this page,

I have a large family that I love a lot

This is a picture of me, James Beane, and my three sons. The picture was taken after a very long and hard night at the hospital the day after Joshua, the youngest, was born. 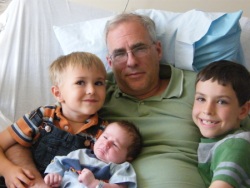 This is my wife Kim, just a day or two before she gave birth to my youngest son on June 30, 2010. Sitting with her are my five older children. (Yes, they are all mine, and all hers! Unlike so many families, my children are privileged to have the same mom and dad, and are fortunate to live in a house where they never have to question mom and dads love for them or each other. 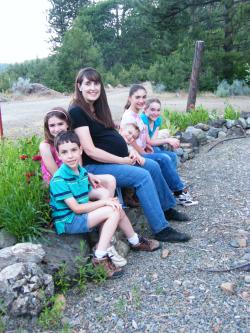 I am a Christian

I am that old fashioned sort of follower of Christ who believes that folks shouldn't be taught that the reason to come to Jesus Christ is so that HE can give you health, wealth, and happiness. The world over Christians are martyred daily for just being Christian, so the lame excuse for Christianity preached in lots of churches in the USA needs to stop. Jesus promised that all that desire to live godly will suffer persecution.


Perhaps you have heard it said that you are a sinner, but what is a sinner? A sinner is someone who has missed God's mark or standard of righteousness, or "rightness" with him and with your fellow man.

Because you have broken God's laws, you have a broken relationship with Him, that can only be repaired by believing that Jesus was crucified to pay the penalty for your sin, died on the cross, and was raised to life by God the Father. Then after believing, you need to tell folks that you believe.

One of the reasons to become a Christian is because there is a very real place of eternal judgement and torment for all who have violated God's laws. That place is call Hell. There is also a very real place called heaven.

The truth is, being good is not good enough, and that "good people" go to Hell every single day by the thousands.

God's laws include the basics like don't lie, steal, commit adultery, don't murder, honor your parents, and the like. If you have even violated one of those laws the penalty must be paid. God says the penalty or "wages" of those crimes is death.


Becoming a Christian makes your life better in the world to come, because Jesus Christ, being God in the flesh, lived a perfect life without violating even one of God's laws. He suffered the consequences of sin for you and I, being beaten and bloodied and nailed with large spikes to a wooden cross. He took our sins upon himself, and substituted His life for yours and mine.

You can have the free gift of eternal life by confessing that you broke God's laws, you deserve to die for them, and that you want Jesus Christ to forgive you your sins. Jesus Christ is faithful and just to forgive you from ALL of your sins, and cleanse you from them. Your part is to believe that Jesus Christ died to pay the penalty for your sins, that He was crucified, and that God the Father raised Him from the dead. He is able to deliver you from the penalty of your crimes. He rose from the dead three days later, revealing to us the promise of eternal life for all who believe. If you believe these things, and speak about them to others, you can be saved,

I believe the Bible is true, that it is the Word of God, that Jesus Christ the only way to God, and that if he does nothing else for me ever, He has already done more than I can ever repay Him for.

I live in Siskiyou County, California

The town I live in has roughly 600 people, the closest larger city is 20 miles away, and has about 7,000 residents. This area is one of the least populated and understandably one of the most economically challenged in California.

Here is the view in the winter from my front porch 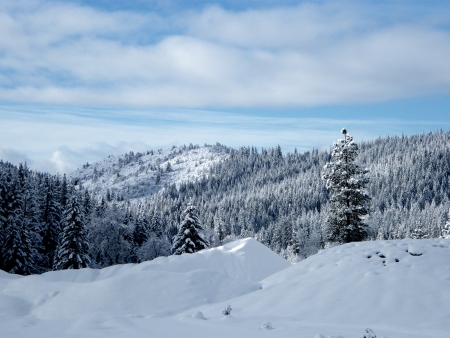 Teatreewonders should speak for itself on this one :-)

If I knew you, I would probably like you. A lot. I like most everyone, unless you give me good reasons to not like you. I think most everyone really wants to be liked.

So, until you hear otherwise, you can assume I really like you. You can even write it down in your memory somewhere that "James Beane likes me". Maybe you'll find yourself thinking, " I like that James Beane guy", and then again, maybe you'll think I'm strange and won't like me...but I think I'll still like you until you give me a good reason not to.

I used to hate school, but have always loved to learn.

In today's schools, I'd be labeled ADD and put on drugs, when in reality all I needed was more challenging school assignments and some focused discipline.

I have always been fascinated by the world around me, and as a child spent hours observing ants, plants, and natural phenomenon like the waves, the rain, and sunsets.

I also am known as James Beane the Carpet Cleaner

I used to install carpets all over Orange County and Los Angeles California working with a fantastic former marine, Dennis Miller of San Clemente, California. He's one of the best folks I've ever met. Say hello for me if you ever meet him. Later, in 1989 I started cleaning carpets, and once in a while still do. It's more of a hobby now, because I like doing the internet businesses more.

If you have ever thought you wanted to make money online, you'll want to visit this page. Can I really build a website

So, now you know me, James Beane,
just a little better.

If you want to know more, you can write to me by clicking this link
Contact James Beane