tinea pedis
Are There Any Home Remedies
That Will Cure Athletes Foot ?

What's Tinea Pedis?. It's commonly called athlete's foot. I often get questions such as,

Tea tree oil is being tested for it's ability to combat tinea pedis, an irritation that is associated with gyms, locker rooms, and public swimming pools.

It's possible that by using a tea tree oil based tile cleaner, or installing tea tree oil gel units (such as SafeTair) in a health club air conditioning system, tinea pedis (Athletes Foot), could be controlled or perhaps prevented entirely.

A summary of studies on tea tree oil published on PubMed Central suggested that tea tree oil may work against specific fungal, bacterial, and viral infections. Tinea pedis, or athletes foot, is caused by a fungus that thrives in warm, humid or moist environments, like locker rooms, showers, and indoor public swimming facilities.

You can use tea tree oil as a topical application for fungus infections and athletes foot, or tinea pedis. Most references on the subject suggest 3 or more times a day applying pure tea tree oil to the infected area.

There are a variety of herbs that can be used in combination with Tea Tree Oil, some can be used internally while others boost the effectiveness of the essential oil. A few work both internally and externally.

Garlic is the easiest to come by and first on the list for anyone fighting any sort of fungal infection, even tinea pedis. Famous for it's folkloric use to ward off Vampires, it may ward off more common and serious threats to our health.

Ginger In our house this is a favorite for lots of common problems. Whenever we travel we carry crystallized or candied ginger to calm motion sickness, my wife ate lots of it during morning sickness, and whenever we have had a cold bug or flu, ginger tea warms the chilled body and soothes a sore throat. more than that, it has a host of anti fungal compounds.

Chamomile A cup of Chamomile tea smells like an entire field of Springtime! Common in Europe in antiseptic preparations, and available here in the US as a cream or gel in some health food stores, this herb has been used nutritionally to support the bodies ability to relieve muscle spasms, as well as containing numerous antifungals.

Licorice That black colored candy originally got it's flavoring from this root, and it has been used for thousands of years all over the world to fight infections.

Licorice is also a favorite nutritional among the Chinese for ringworm infections.

Goldenseal, Barberry, and Oregon Grape All three of these plants have a strong antifungal compound called berberine.

Goldenseal, a largely American herb, is rapidly disappearing from the wild, mostly because of over harvesting, poor management, and a slow growth habit.

There is a move in the herbal industry to limit the wild-crafting of this herb, and a push to produce it on large scale farms. Because it is so slow in it's growth, it is not an easy proposition. Fortunately there are a few alternatives, one of which is extremely common. 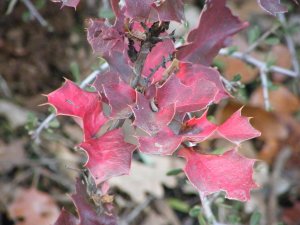 Oregon Grape has many of the same active compounds of Goldenseal, and is a common plant throughout much of the northwest. In fact, this plant grows wild all over my yard, and covers large portions of the woods surrounding our home.

Oregon Grape has many of the same active compounds of Goldenseal, and is a common plant throughout much of the northwest. In fact, this plant grows wild all over my yard, and covers large portions of the woods surrounding our home.